As difficult as life in the military can be, many veterans find that transitioning into a civilian job can be particularly tough, too.

These brave men and women possess an array of leadership and business skills that make them a valuable asset to any company. Despite this, some struggle with making the transition to a civilian job. Of those who do find civilian jobs, 44% end up leaving their first post-military job within a year. 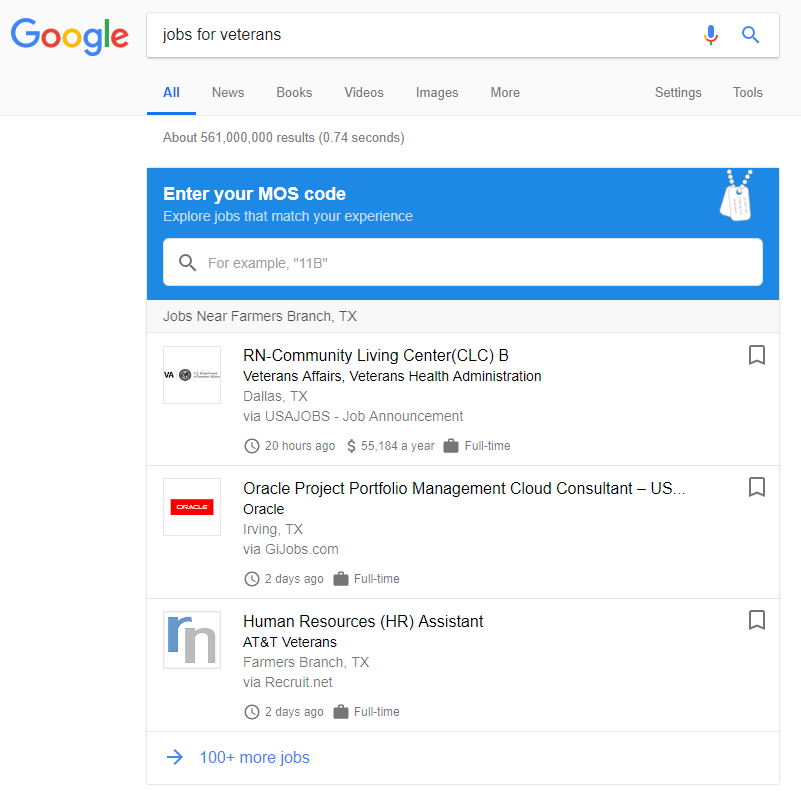 Now, a new job search tool by Google is making it less complicated for veterans to be connected with opportunities that are relevant to their military experience.

After typing in “jobs for veterans” on Google, former service members are asked to enter their military occupational specialty code (MOS, AFSC, NEC) to see relevant civilian jobs that require similar skills to those used in their military roles.

For example, if you were a combat engineer in the Army, simply type your MOS code – in this case, 21B – into the blue box shown in the picture to the left and hit the Enter button. You will now see all of the jobs nearby that best match the skills and experience you gained from your military service.

In an announcement from Google, Matthew Hudson, a Google Cloud program manager and Air Force veteran who completed three tours in Iraq and Afghanistan, wrote that many veterans miss out on opportunities because “there isn’t a common language that helps recruiters match a veteran’s experience with the need for their skills and leadership in civilian jobs.”

“As a result, 1 in 3 veterans — of the roughly 250,000 service members who transition out of the military each year — end up taking jobs well below their skill level,” Hudson said.

The addition of this new job search tool is just one of three veteran-specific initiatives Google introduced in late August as part of their Grow with Google campaign, a five-year, $1 billion commitment to help offset how technology is rapidly changing the workplace.

Google is also helping veteran-owned and veteran-led businesses find new potential customers. When users look something up on Google Maps and in search on mobile devices, a “veteran-led” designation will be visible on the business description as one of its attributes.

Additionally, Google is giving a $2.5 million grant to the USO to provide training and career guidance for service members and military spouses who want to earn the Google IT Support Professional Certificate, which promises a direct route to employers and could give veterans a serious leg up in their job search.

“The transition is complex, and we hope Grow with Google’s new tools and resources can play a part in making that easier,” Lisa Gevelber, Vice President of Grow with Google told Fox Business. “At Google, we believe technology has the power to improve lives. We look forward to working with America’s transitioning service members to help them succeed in civilian life.”